You are here: Home / How To / How to Dispose of Solvents

It occurred to me that after I explained how to clean paint brushes, I never really explained what to do with the leftover waste. I mean, I did a little bit, but not enough. So, I figured I should cover that, so no one creates a hazardous waste situation!

The biggest thing I learned from researching this? Solvents are reusable. Who knew? I guess that’s a good thing. You can reuse them that cuts back on waste.

Of course, eventually, you can’t recuse your solvents anymore, and that’s when you need to know how to dispose of solvents. It’s not that hard. But, it’s not that easy either.

I figured the best place to start was at the EPA. And, sure enough, I found a lovely guide about figuring out if a solvent is a hazardous waste. That struck me as odd. Wouldn’t a solvent — used or unused — be hazardous waste? I mean, come on, there are tons of warning labels all over that stuff. It’s got to be a hazard!

Most of the document was dry and boring (sorry EPA!). But, I did run across this interesting tidbit about solvents and hazardous waste.

Like I said, it stands to reason that solvents aren’t the best thing for your health. And, according to OSHA, they are not. I’m not going to go over all the possible problems solvents can cause. But, when you get rid of solvents, whether you’ve used them up or not, they can possibly be a hazardous waste.

Yes. I figure it’s just everyone hedging their bets, but that’s the language. What’s weirder is that, and I’ll quote this, so I get it right:

“…a solvent must first be classified as a solid waste before it can be considered for classification as a hazardous waste.”

It goes on to say,

‘Spent’ — contaminated through use and no longer able to be used for their intended purpose without first being regenerated, reclaimed or otherwise reprocessed,

Expired and can no longer be used,”

And a bunch of other things.

Side note. How does one regenerate a solvent? Magic?

The document goes on to say that if your solvent is solid hazardous waste, you’ve got to be careful disposing of said solid waste. Then there’s a whole section on how to dispose of solvents and hazardous solid waste.

I kind of figured that was the case. The word “hazardous” kind of gave it away.

I think the problem is the document. It’s a government guide for businesses, and there are a lot of rules and regulations about hazardous waste and their disposal. That’s probably a good thing.

However, I’m just a hobbyist. How do I dispose of solvents?

How to Dispose of Solvents (When You’re Not a Business)

Thankfully, there are options for those of us who, as casual solvent users, only generate a small amount of hazardous waste. That said, no matter how little hazardous waste we produce, we have to dispose of it carefully and responsibly. Remember, it’s bad for the environment to dump it in the trash, and it can spontaneously combust.

This struck me as insane when I started researching it. And I haven’t done it yet. If you have, please tell me all about it in the comments. I have questions!

Apparently, you can reuse solvents.

What a fantastic thing! You can save money and create less hazardous waste. Cool.

The process, though, strikes me as a little time-consuming. That’s not a big deal. The bigger deal is that you’ve got to let the solvent for a loooong time. That means the fumes are wafting about. I suppose if you do this in a ventilated area (or outdoors), it’s fine, but that’s something to think about.

So, how do you reuse solvents?

You’ll need a glass container. A tall jar with a lid is best. That’s the easy part. You’ll also need a way to mark the container because you want to write the type of solvent and the date you did this little project. Masking tape and a permanent marker are probably your best bet, but I bet you could use a sticky label (like a return address label), too.

This stuff is going to sit for a while, so pick someplace that’s well ventilated and away from heat, sparks, and flames. I don’t have any good suggestions for this. Use your best judgment and be safe!

If you already cleaned your brushes in a different container, you can pour the used solvent into this new container. Or, if you want to save a step, skip the extra container and soak your dirty paint brushes directly in the glass container you’re going to use for the next step.

When the brushes are clean (or you’ve poured the used solvent into the new container), let the solvent sit. You can place the lid on the jar, eliminating some of the odor and lessening the chance of an accidental spill.

Let the jar sit overnight (or longer if you have to). The paint solids will settle out, leaving you with a thick sludge at the bottom and the solvent on top. If you’re not sure that everything has settled, check the top layer. It should be free and clear of debris. It should also look thinner than said sludge.

When the paint and solvent have separated, pour the reusable solvent into another clean glass container, seal that up, and reuse whenever you want!

Bonus Tip for the Impatient

The problem with the “let it settle” method is that overnight may not do the trick. It can take longer than a day — or even two — for the paint solids to settle out.

If you’re the impatient type, you can strain out the solvent from the paint solids. Try this:

Pretty cool. I know this sounds like a pain in the behind (and maybe it is. I don’t know), but I do like the idea of saving and reusing solvents. Next chance I get, I’m going to give it a whirl!

What About the Paint Sludge?

By now, you’ve probably guessed that you can’t just toss your used up solvent in the trash. That’s true. You can’t do that because, well, it’s hazardous waste. But you also don’t want to start a pile of hazardous waste in your basement (right?).

But with both of these methods, you still have a bunch of leftover goo. Your disposal options are pretty limited here. So, how do you throw out used up solvents?

Fortunately, there are plenty of ways the average person can dispose of their solvents and hazardous waste. To make it easy, just head over to the EPA’s website and click your state. That will tell you where you can safely and legally drop off your used up solvents.

To Trash or Not to Trash?

This is where it gets interesting. Depending on the solvent (and the amount), you can dispose of solvents in the regular trash. However, this only applies to organic solvents. And, just so we’re clear, saying it’s an organic solvent doesn’t mean it’s safer or better for you. Organic solvents can still cause problems in humans.

The amount of solvent you can dispose of in the trash is “small.” What does that mean? It depends where you live. It can be “small” or “one inch in the bottom of the container,” or who knows what else.

If you have a “small” amount, let the solvent dry up into a hardened mass, then toss it in the trash. Some people advise you to wrap up the mass in newspaper first, then seal the whole mess in a plastic bag. That’s probably not a bad idea.

Those are pretty much your options for disposing of solvents. It’s not a lot, but what can you do? I love the idea that you can strain the paint debris out and reuse the solvent. Now I’m looking forward to the next time I paint because I’m going to test the recycling method out and see what happens!

Any other tips and tricks? Advice on how to strain out and reuse solvents? Let me know.

And, as always, a handy infographic for you! 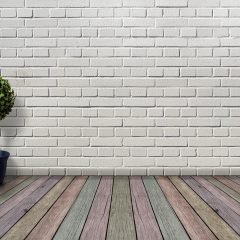