The next day, I went back and checked on the second floor. It still looked pretty good, but I should have used more weights.

Perhaps when I fix the missing boards, I’ll pop those up and put in replacements. Or, try to glue them down again.

I honestly assumed the bottom floor would be easier, and it was. Without the stair hole to contend with, it was far easier to create the template. That doesn’t mean those stairs don’t cause problems, though!

I start by dumping the bag and laying things out, just like the upstairs. As a side observation, the boards in this bag were also slightly damp, but less so than the upstairs bag, leading me to believe my theory of “I didn’t let them dry enough before storing them” is true.

And, just like the upstairs, the downstairs has warped boards, too.

Sorting through the boards, I came across this interesting piece.

Yup, that says “stairs” on it. And, as you can see, there is a corresponding “stair” piece on the template.

And, as you can also see, rows 19 and 20 are circled. That must mean something. Only I have no idea what!

But, I did skip 19 and 20. I can see that I don’t have them, and since they’re circled on the template, I can only assume this was intentional. What the heck was I thinking?

That’s where this blog comes in handy. Not only does it help other newbies, it’s also a fantastically detailed record of what I was thinking, planning, and plotting. Here’s what I said on this topic:

On the right of the picture, you’ll notice another funky gap. That’s on purpose. It’s for the stairs. I think I’m going to install the stairs first, then this part of the floor, then go back and fill in the gaps.

Ah, so I was planning to figure it out later.

Well, that answers that. I figure at that point, I might as well get going because, why not?

Thanks to what I learned from row 40, upper level (that sounds like concert tickets), I decided that this time, I’d start at the back and work my way front. Much better idea. It was easier for me to manipulate the wood. Again, I think this has to do with the angle at which I held my hands. There was nothing “in front” of me to worry about, so I could hold my hands lower, and that made things easier on me.

Also, my fingers were less sticky. Always a huge help!

Then it was just working my way forward. Until I hit some of the super warped boards.

I don’t know how else to describe them. They just would not stay down. Here’s how much weight I had to put on them:

That’s a vinegar bottle, a two-pound weight, and painter’s tape holding all that down. Seriously. Balsa wood is supposed to be lightweight, but I had no idea it was this stubborn!

Anyway, for the most part, things we’re going pretty smoothly, with a few glue issues here and there.

There’s nothing too exciting to report, in terms of gluing down the boards. By this point, I was kind of a dollhouse floor laying pro. Until I got to the stairs.

Because I was at the point where I was “figuring it out,” I ended up gluing everything else in place, skipping the one row that was marked “stairs.” I really didn’t know what else to do. As far as I know, I had everything in place, and it would all line up.

For fun, here’s what the floors looked like when I was done laying them, with the exception of the “stairs” row.

I know! Nice! Kind of. Of course, the downstairs floor isn’t exactly lined up, either.

Again, I’ll figure that out later.

But now I have no choice. I have to figure out what I’m going to do with that “stairs” row, so I put the stairs in place.

From the front, it looks great, but from the side….

I’m not going to lie. I have no idea. I guess the template was off and, well, I don’t know. And it really doesn’t matter. It looks fine, and I’m not going back to change it, so I’m forging ahead!

Here’s what happened when I put the “stairs” board in place (without the stairs).

Yeah, not even close, but I seem to recall that was my plan from the get-go. For the record, here’s what that looks like when I slide a few boards in place.

And up close, it looks OK to me.

However, that’s not nearly as perfect as it seems.

Up close, you can see that the stairs aren’t even, for lack of a better word. I’m betting that’s the stringer causing issues. I may be able to fix that, I may not. But honestly, looking everything over, I’m thinking of ditching this set of stairs for a spiral staircase. We’ll see!

Here’s what the Keeper’s House looks like with the stairs and the downstairs (fake) wall in place (I couldn’t find the real one). Pic

Overall, I’m pretty excited about how this turned out. And I learned a lot from this project:

What’s next? Not sure. I have to fill in some of the missing gaps, but that should be a few simple cuts on the miter box with the leftover wood. I think between the “wrong” numbers and the test pieces, I shouldn’t have to dye any more balsa wood.

After that, though, it’s decision time. Like, for real. I’ve decided I’m holding off on the shingles for now, so that means interior work. I have a feeling my next project is going to be tiling the front hall and the bathroom.

Stay tuned, and if you have any dollhouse tiling advice, drop it in the comments! 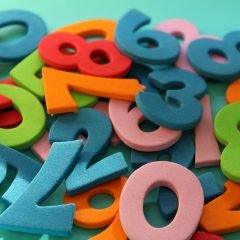