I thought I had this sandpaper thing figured out. Turns out, I don’t. Sandpaper grit is a science in and of itself. Is it complicated? No. But, looking back at what happened when I sanded the clapboard (and in between paint coats), I’ve decided I wasn’t the problem as much as the sandpaper was!

Looking back, I was using the wrong sandpaper the whole time. I was using fine sandpaper grit, not medium. While using fine grit sandpaper would have been OK after the second coat of paint, I really need something in the medium range during the first sanding.

Another newbie mistake and lesson learned!

Sandpaper: What Is It Really

I don’t know why it’s called “sandpaper” when it isn’t made of sand. The truth is, sandpaper is made of fine particles that remind us of sand but has nothing to do with the beach. Sandpaper particles are either natural or man-made, and it’s the size of the particle that determines the sandpaper grit.

What is sandpaper made of?

Well, if sandpaper isn’t sand, what is it?

In case you’re wondering, it’s not always easy to figure out what particles are in some sandpapers. Some manufacturers list it. Others call it “proprietary mineral technology.”

Because it’s not easy to get specific sandpaper particle information, it’s better to rely on grit to choose the right sandpaper for your project (dollhouse or otherwise).

What Do All Those Numbers Mean?

When you head out to the store to buy sandpaper, you’ll notice that the package usually has a name and a word on it. The number could be 50, 220 or almost any number in between. That number tells you the sandpaper grit.

Of course, there are also words on the sandpaper package. Fine, coarse, medium — they all tell you what kind of sandpaper they are (specifically, the type of grain on the sandpaper). Here’s a #protip. The grit number and the grit name are usually on the back of the sandpaper sheet.

These are, well, coarse. That means the sandpaper has sharp materials. Coarse sandpaper grits are for sanding off things you don’t want (like paint drips). While you can use coarse sandpaper for shaping and rounding edges, you probably shouldn’t use it for fine detail work or edges you want to keep in shape.

The most commonly used sandpaper grit. However, it’s best for unpainted surfaces. In fact, if you’re sanding unfinished wood for painting prep, you should use a 150 sandpaper grit paper to help the paint stick. A medium sandpaper grit smooths out the wood surface enough that you don’t get “wood fuzzies” but also leaves enough “grip” in the surface of the wood so the paint sticks. The more pressure you apply when using medium grit sandpaper, the more you will sand off. If you don’t want as much material sanded off, apply less pressure.

This is the sandpaper grit to use between paint coats. It’s gritty enough to sand off any wood fuzzies or paint mishaps, but fine enough that you won’t take the paint off. You generally won’t use this grit on a first sanding. And, never sand unfinished wood that you’re going to paint with anything higher than a 200 grit. It just won’t work.

It’s doubtful that you’ll use this sandpaper grit. But, you can use it on painted surfaces that need a final sanding that’s light and delicate. Most of these sandpaper grits are used for wet sanding (which is another thing!).

Super tough, super strong, and super coarse. This is what you use on old paint, varnish and other finishes you never think are coming off. Only use this grit on finishes that will not budge.

I know there’s a pun in here somewhere about looks. This is as fine as it comes and you should only use this grit for polishing jobs.

Of course, some things in life aren’t simple, and sandpaper is no exception.

The sandpaper grit ranges listed above are those used in the United States. Before it merged with the Unified Abrasive Manufacturers’ Association, the Coated Abrasives Manufacturers’ Institute (CAMI) created the above scale.

Most of the time, the sandpaper you buy at the local store gives you a sandpaper grit on the CAMI scale. However, sometimes (particularly if you purchase your sandpaper online), you’ll come across sandpaper grit that is sized according to the Federation of European Producers of Abrasives (FEPA).

If you aren’t sure what scale your sandpaper grit is on, FEPA sandpapers have the letter “P” before the number. So, it would look like P-100 or P-82.

That said, the number does not correlate directly to the CAMI scale. You have to convert from CAMI to FEPA.

Which Grit Is Right for My Project?

It depends on what you’re trying to accomplish! But, you knew that. However, I will say that based on personal experience, I would rarely use coarse sandpaper on dollhouse items. The exception is if you’re cleaning up a paint drip.

Coarse sandpaper is great for shaping wood, removing layers of paint, and fixing boo-boos. In general, you aren’t shaping wood on your dollhouse. You might be, but you usually aren’t. Mostly, you’re smoothing down wood that’s pretty darn finished (at least, if you use a dollhouse kit). You’re better off with a medium to fine sandpaper grit for most of your projects.

Keep in mind that choosing a sandpaper grit isn’t a one and done deal. More often than not, you’ll start with a coarse to medium sandpaper and work your way up to a fine grit sandpaper as you paint and stain your wood.

The Nitty Gritty from Big to Small

I’m not going to lie. I really wish I had researched sandpaper grit before I painted the Keeper’s House. I had no idea there was such a difference in sandpapers. Of course (no pun intended there), I knew some were coarser than others, but I did not realize that coarseness makes such a big difference in any project.

Well, there’s nothing I can do about it now. You, on the other hand, can learn from my newbie mistakes. To stop you from messing up like I did, I created a cheat sheet for you. 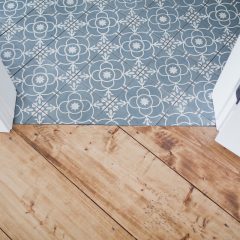