You are here: Home / How To / Balsa Wood vs. Basswood: What’s the Difference?

As I continue working on the wood floors for the Keeper’s House, I am beginning to understand why people use wood floor sheets in their dollhouse. Sheesh! Cutting all of these balsa wood strips is hard. Not hard is in “hardwood” but hard as in “I regret my decision.”

I picked balsa wood because it’s a softwood and I figured softwood would be easy to cut. I was right. It is easy to cut. But it’s that “ease” that creates a new set of problems I hadn’t anticipated — namely the splintering and cracking on the ends.

I posted pictures on Instagram, and a few helpful people (thanks again!) mentioned basswood as an alternative. I had heard about basswood at some point, or maybe I ran across it at the store. In any case, the whole reason I picked balsa wood vs. basswood is that balsa wood comes precut in convenient strips that are perfect for wood floor planks (in a dollhouse, anyway). I knew I’d be cutting the balsa wood to size, and figured it would be easier than dealing with basswood.

See, the problem with basswood was I could only find it in large sheets or wide strips (like real-life floor plank size). The difference in balsa wood vs. basswood is that balsa wood is smaller. I figured it would take less work to get in shape.

The basswood, well, it was going to take some work with a bunch of tools and set-ups that I don’t have. I did end up buying a miter box in the end to cut the balsa wood strips. Of course, once I got said miter box, I realized I could use it on the larger basswood.

But, after all of the splintering and cracking, I’m wondering if basswood is a better choice than balsa wood.

What Is Balsa Wood?

Balsa is a type of tree. I honestly didn’t realize that until I started researching this. Don’t ask me what I thought it was though. The balsa tree is a fast grower and ready for harvest in about five to six years. It’s also the lightest weight wood at six to nine pounds per cubic foot — whatever that means.

In case you’re wondering, the reason balsa wood is so light is because of its cell structure. They are big but have thin walls. This means that, compared to other trees, balsa has a small solid matter to open space ratio. It also has a relatively small amount of lignin. Lignin is the stuff that holds the cells together.

The wood is light in color and has open pores. Interestingly, the open pores mean that balsa wood sucks up whatever dye or stain is applied and, therefore, most people don’t dye it. I am not one of those people.

And, apparently, balsa is very strong relative to its weight. Balsa wood is, according to the experts, easy to work and sand, but should be cut with sharp edges. It also is better to glue it than use nails or screws.

Other cool things about balsa wood include the fact that it’s buoyant and a good insulator against temperature fluctuations and vibrations. So, I guess my dollhouse will be warm in the winter and cool in the summer. And, it’s used in flotation devices, as insulation, and in artificial limbs.

I had no idea balsa wood was so versatile.

Basswood, on the other hand, isn’t just known as “basswood.” It’s also goes by linden and American lime (even though it doesn’t produce limes), but it’s mostly called basswood. And it’s tall. They can grow to 124 feet tall but are usually around 50 to 80 feet tall.

Unlike balsa wood, basswood doesn’t grow quickly. It only grows between 13 and 24 inches per year. That means, on average, it takes a basswood tree about 20 years to reach 20 to 30 feet in height.

Other fun facts about basswood include that it has no odor, even when you work with it. And, basswood also has a lighter texture (but not as light as balsa) and is fine-grained. Even though it’s a hardwood, basswood is soft enough to make it the wood of choice for carving, instrument making, and in furniture.

This Tells Me Nothing

Oddly, hardwood and softwood trees are defined by, get this, how they reproduce. It’s got nothing to do with how “hard” or “soft” the wood is.

Deciduous trees produce hardwood. And, for those of us that can’t remember a thing from biology (pretty sure it’s biology, right?) a deciduous tree loses its leaves annually.

Here’s where it gets interesting. Hardwood trees are angiosperms (no giggling!). This means the plant (or, in this case, tree) produces covered seeds (think: fruits, for example). Angiosperms usually grow flowers to reproduce, and, well, you know the rest.

Softwood comes from conifers. Conifers are evergreen trees. Those are the ones with the spiky green things instead of leaves, and they generally don’t fall off the tree in winter.

Conifer trees are gymnosperms. They reproduce by, you guessed it, forming cones, like, say, a pine cone, which help spread the pollen to other trees via the wind. And so on, and so on.

That’s how you classify hard and softwoods. It’s got nothing to do with the actual wood. It’s confusing, but, I guess if you’ve got to go with something, why not this.

OK. You’re going to hate me, but it really is a personal choice. In the end, I think it will depend on what project you’re doing, what your budget is, and how skilled you are at sawing wood. Seriously. As I’m working on the floor, I’m learning that can make a huge difference.

The biggest problem I’m having is the splintering at the ends of the balsa wood strips. That’s due, in part, to the fact that I don’t always cut all the way through the wood. A total newbie mistake.

But, instead of putting the wood back in the miter box and sawing some more, I end up bending the wood at the weak point I’ve created and snapping it apart. This works most of the time, but not all of the time.

When it works, I get a nice clean break and need to do a minimal amount of sanding. When it doesn’t work, well…

Again, I get it that this is partly due to the use of balsa wood. It’s got a reputation, you know. But, let’s be real, here. It’s also partly due to my learning as I go.

And, of course, there are balsa wood cons

I haven’t yet worked with basswood. Although, after this experience, we’ll see what I choose for the next project. In any event, here are the pros and cons I need to think about.

Not me, that’s for sure. I know my limits!

Also, as we’ve established, I have no idea what I’m doing.

For the next project, I’m considering wood floor sheets. Off the top of my head, the con is that you can’t create your own pattern. The pro is that it’s one big sheet, so there’s a lot less cutting to do.

But, I should probably finish the Keeper’s House, first.

Below, you’ll find an infographic that outlines the key differences between balsa wood vs. basswood as well as a list of pros and cons.

Thoughts? Have you used wood floor sheets? Had an awesome experience with balsa wood vs. basswood? Or vice versa? Let me know! 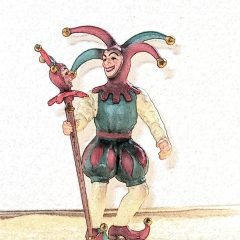